A while back I mentioned that Zoya had a few surprises this summer, the first of which being new matte polishes for summer. The second thing I didn’t expect was to fall in love with this Summertime collection. I figured they’d just be nice cremes to go along the sparkly Sunshine collection, but these polishes won’t play second fiddle, and I’ve been wearing them almost nonstop for the past two months.

Although there are dupes for most of these (see comparisons at Let Them Have Polish), I really love the feeling of collection as a whole. The colors bring to mind humid and magical summer nights. If you don’t already own their dupes and you’re a fan of the Zoya formula like I am, you should definitely get your hands on these – especially while their Color Lock promotion is happening.

So the third surprise from Zoya for me was Tamsen. I was the least excited about this polish when I place my order, mostly because I wouldn’t think of “brick red” as a great summer color. But really, I would call it more of a “poppy” – which I love! This is my top pick for the collection.

Red number two is Sooki, a bright, notice-me color that looks like little maraschino cherries on your finger tips. Very cute, but my least worn of the bunch. And while it applies effortlessly, as you can see there is some VNL at two coats.

I showed you Areej before on a Pink Wednesday. Now, pinks are never my go to, but I like having this around. It has depth that makes it seem less frilly, and it’s a universally flattering hue. 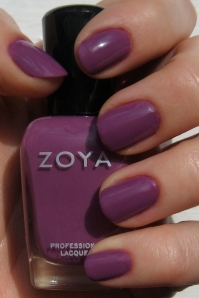 My second favorite of the collection is Kieko. It seems to bring out the almost non-existent warmth in my skin tone, which makes me think it would play up a tan nicely if you have one. It appears more vivid in person and has a gorgeous glossy finish. 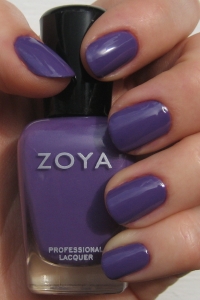 Mira, another pretty purple, is heavy on the blue tones. It makes an awesome pedicure in particular.

Breezi is a unique just slightly tealed blue. It’s a really fun color, but very attention-grabbing, and can look a little too youthful paired with the wrong outfit.

The formula on every polish in this collection is awesome. Tamsen and Kieko get my highest recommendation. And I don’t care how many reds you have, you still need Tamsen.

Mira comes in a close third, then Areej. Breezi is really cute if you’re daring enough. Sooki is the only one I feel is just okay.

Zoya polishes are vegan, big 4-free, and do not contain Camphor.

Zoya retails at $8 for .50 oz.
The full six piece Summertime collection retails for $48.

Now that summer is officially here, are you wearing more brights? Who else loves breaking out the sandals and showing off your pedis?